The Menage a Trois: It’s said to be every man’s fantasy, and maybe it’s yours, too- but it can be intimidating.  Of course, there are many flavors of threesomes- I’m going to address the M-F-F scenario here, but there are some good tips for everyone.

For many years I wondered what the motivation for the guest could be.   As a host, I’m having a sexy adventure with my partner that we can enjoy reliving together again and again, and she’s likely just having a one-night stand with us when she could be out having sex with single people.  Later, I had my first experience as a guest and found that the advantage of being the visitor is that you’re the dang superstar!  Being the guest is giving everyone that electric first kiss, helping a couple you’re attracted to have good sex, and hopefully having some yourself!

I know that there are sometimes three-ways where nobody is a couple, but that sounds like chaos, just two girls climbing over each other, hissing, trying to establish dominance.  I have no tips for that one but hide your wallet and use condoms.

Good advice for the host:

Good Advice for Everyone:

Good Advice for The Man:

Good Advice for The Guest:

Well, the nice people at LoveTV are letting me write articles for them about love, sex, and dating, and then they did me the favor of decorating my article with stock photos, here of good-looking Asian models.  It’s called How To Date Today: A Guide For Every Generation. 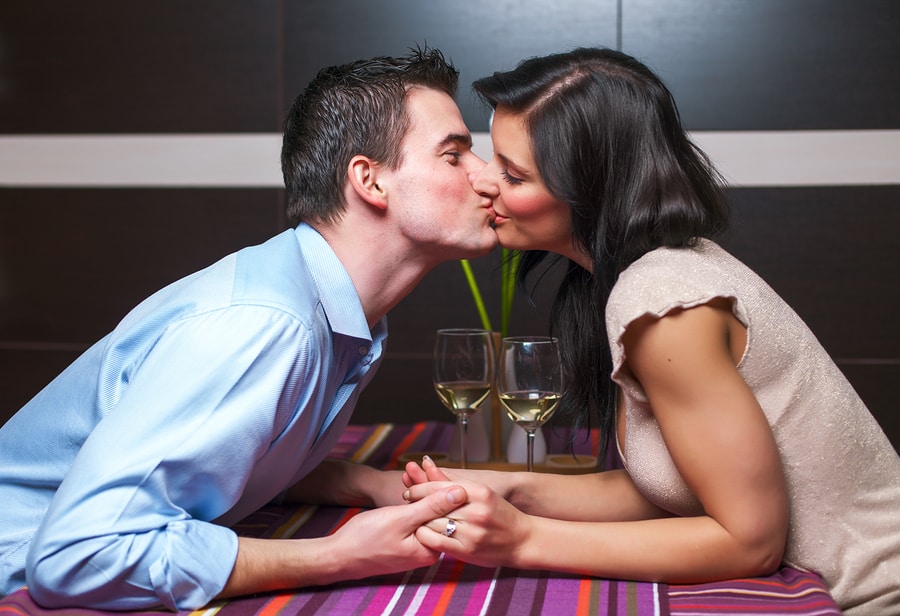 “I went on a nice date with a man last week.  We spoke for hours, and I think we really liked each other.”

“Shouldn’t I cancel the other two dates, because I like the first man?”


“No, mother, you can’t tell anything from a first date.  Meet the other guys and see what happens.”

My mom called a couple days later to say she hadn’t heard from that first guy that she liked, even though she really thought she would, and why would he spend so much time with her if he wasn’t interested in seeing her again?  That’s when I realized the real sadness of millennial style dating- explaining to your mom that she’s not allowed to develop feelings for people right away.  The first step of online dating is not setting up your profile, but building a turtle shell of indifference around your heart.

The next week, my sister told me “That guy finally called Mom.  He’s pulled up outside her house.  I am totally spying on our mom.   Oh my god he brought flowers.  Oh my god she’s walking him into the house.”

I assured her that it was just to put the flowers in water, and that she shouldn’t worry.  “Baby boomers don’t jump into the sack like twenty year olds with no body hair.  There’s only so much they can affect.  I think.”   But honestly, I don’t know for sure.

The lovely and vivacious Sharon Houston asked for my take on this Missed Connection, and it’s a doozy:

I felt like you were trying to catch my eye, and Im not sure if you were staring at me in a good way or bad way haha let me know.  I was with a girl and wearing a black hat, black shirt and sweat pants with glasses. If this is you let me know what you were wearing, because I thought you looked really good but I just couldnt say it or stare too long because im a nice guy and was in the company of another woman (:”

First of all, we all know that hitting on a girl at a sex clinic takes brass balls, or at least a certain lack of both self awareness and social graces. To do so while accompanying another girl to the sex clinic is just phenomenal.

“Not sure if you were staring at me in a good way or a bad way…wearing a black hat, black shirt and sweat pants.”

LOL WTF She’s looking at you in a bad way, asswipe. You’re wearing sweat pants in public like a giant baby- and if you can’t dress up for your first abortion, what will you dress up for?

I am prone to faking laughter when things get awkward haha.  It’s how you can tell I’m an indigo child LOL.

And what amazing, punctuation-starved company that is!  I hope both your STD screens came out clean?  Yes, I’m pretty sure that waiting until you’re alone to post a missed connection is what nice guys and gentlemen do.

“Let me know what you were wearing”- I hope you remember what you had on every time some asshole stares at you in public. While we’re at it, what kind of phone do I have? What color are my eyes? What inconsistencies were circled in the Highlights magazine in the waiting room? Are you not the Sherlock fucking Holmes of strangers staring at you?

I’m kidding, kid. I hope you do find love with everyone at the sex clinic.

I saw you in line at Kitson for the Grumpy Cat book signing. I commented that I loved your hair. I couldn’t talk then, but I’d love to connect! E-Mail me if you find this and would like to talk! You are stunning. 🙂 Doubt this will work, but you never know!

OK, let’s read this for comprehension:

“AT A GRUMPY CAT EVENT”: we are both idiot children raised by the Internet who worship an animal so crippled by neurological dysfunction that it cannot walk and will be dead in a year, but whose owners will try to retire on the money he earns

“You had purple hair”: you saw something in a magazine and decided to adopt a Festival lifestyle but your favorite band is Arcade Fire and you’ve never heard of any other bands.

FUCK THEM IN THE FACE

Postscript: Grumpy Cat and his ne’er do well compatriot, Lil Bub, passed away the same year in 2019, of their profound medical anomalies.  I don’t know what happened to the star-crossed lovers in this ad.

I am friends with some young adults who are constantly hounding me about what kind of tips I can offer for kissing girls.

In my generation, we learned about kissing on the streets, where we would spend hours furiously smooching a piece of tarmac until our mouths were rubbed raw and smeared with creosote.  These days, I guess we can learn how to kiss on the Internet.

Tip 1:  Always Something There To Remind Me

Make sure to cover the whole bottom half of the girl’s face with an even layer of your spit.  Imagine a dotted line from ear to ear, across her nose, then reaching down to her chin, and try to cover that whole area.  Hormones are tricky things, and you don’t want to walk away from this adventure without her being able to smell your lunch on her upper lip.  That’s a lovemaker’s calling card.
Tip 2: Don’t forget the tongue!

If you were to kiss a girl that you liked, like *really* liked, and you just thrust your tongue rhythmically down her throat, that would probably subliminally implant an idea about something else in her head…wouldn’t it?  Try to do it in time with the Bee Gee’s “Staying Alive,” just for fun.

Nobody wants to think about the worst case scenario, but a real modern lothario is going to have to accept the possibility that some of his conquests may die.  How can you help?  Well, think of every kissing session as an opportunity to take in information.   If you’ve spent some time getting hot and heavy and you could not assist the police in making a detailed plaster cast of the inside of  “the victim’s” mouth, you’ve wasted everyone’s time.  Touch every tooth with your tongue.  Now, do it again.  Make notes.

If you find you have time on your hands without an actual kiss recipient, practice on your hand or on the crook of your elbow (The Frustrated School-Boy).  Melons are no good, they emit a telltale smell when they’ve been kissed for too long.

It’s well known that there’s nothing that makes a girl feel safer and more cared for than when someone, preferably James Franco, softly caresses her cheek, then gently cradles her face in his hands to kiss her.  Now, imagine how much better she’d feel if imaginary James Franco had his hands loosely but solidly around her throat!  That’s a move that really lets a girl know she “rates.”

Giving hickeys, the practice of making a suck mark on a girl with your mouth, has fallen out of fashion.  Hickeys serve a lot of purposes.  For one, they are marking your territory, like a dog pissing on a tree.  For second, if you are judicious about the size and location of your hickeys, they can protect your property because you’ve marked a pretty girl in a hideous manner.  Thirdly, it can be a good indicator to parents that it’s time to get this little trollop on a birth control method if they don’t want to raise a surprise grandchild!  Also, if you are dating a particularly simple girl, she may form the impression that you are a sexy vampire, a la “Edward.”  How exciting for everyone!

I once saw a Dunkin’ Donuts employee in Plano, TX who was wearing a temporary turtleneck of hickeys, covering him from his jawline down into his uniform, and although it was nauseating, I thought, “Well, at least somebody loves him.”  It may have been a series of unfortunate birthmarks.  What am I, a scientist?

This really is too personal to put on a blog , but the artist formerly known as Spouse recently said he thought we should get a divorce, so that he could date someone else.

The month since has been an interesting education in my own vanity and in the many ways I could feel bad.  I have already learned so much about myself, like that I’m used to fiddling with my wedding ring a hundred times a day.  I know that most of my Portland friends have never even known me without him.  Your kind thoughts are appreciated.

2012 Postscript: In a hilarious update, he has continued the feel-good Valentines’ tradition by remarrying on the same day he dumped me, a year later, on the radio!  I wrote him “Uh, congrats, I guess” and he texted back “ZOMG THAT IS SO SWEET OF YOU THANK YOU SO MUCH.”  Still and all, I hope Third Wife has better luck with him than the first two, because, you know.  He cheated on us!

Q: what was @reggiewatts doing onstage with Devo at @cruelworldfest ? A: grooving

I hope I never have to quit standup, because then I would have to pretend that my partner or children are really important to me

Ok internet! What kicky REVOLVE purchase will distract me from women in America being forced to give birth

I don’t know about this profile picture app. It

My first headshot, by @realkittenpants

I do what Barbara Kruger tells me to

I thought it was Liam Gallagher

Accidental art near my house

When I was in seventh grade, there was a girl name

Super excited for this next LA WOMAN show, a tribu

Barbara Krueger at @lacma was dark and funny as ev

This is my new street gang. We are called the Isl

Brb going to lick all the mailboxes on my way out

A nice day out with some unicorn boats and @tiffst

Tonight! Join me, all of London!