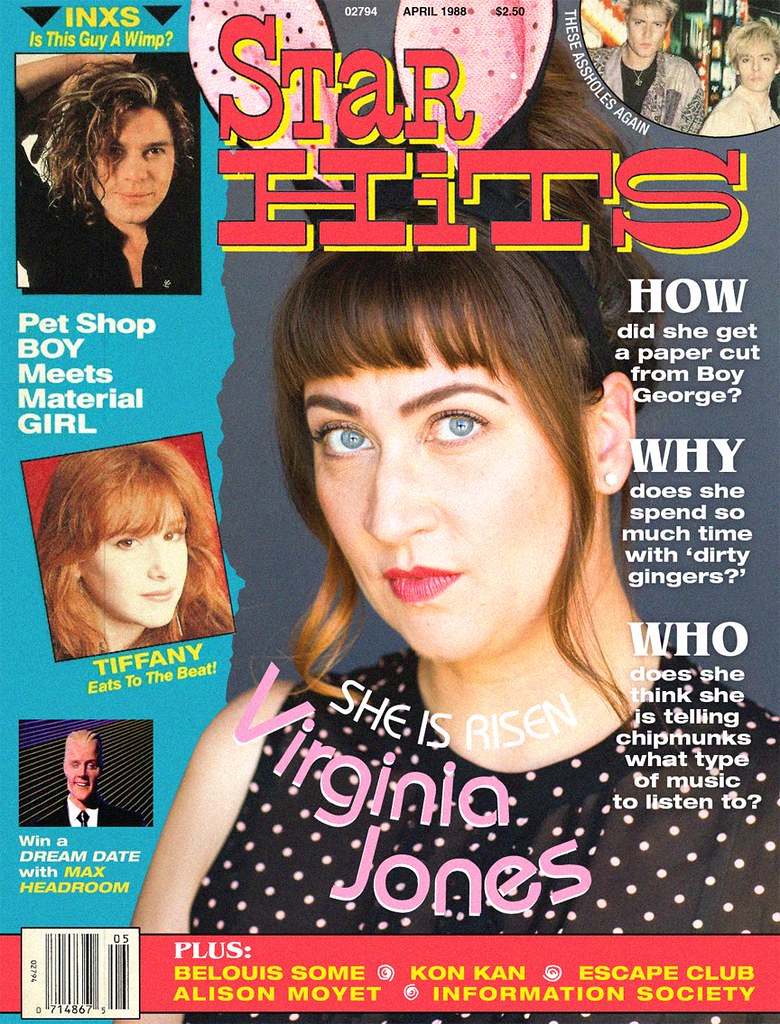 Growing up in Texas but *with* MTV, I identified myself as a New Waver and found the lifeline for all aspirational cool kids at the time, Star Hits magazine.

Heavily influenced by its UK parent, Smash Hits, it was chock full of awesome photographs of the most important people in my life, including Duran Duran and the Cure.  They called Morrissey Mozz and Madonna Madge and they had advertisements for punk clothes and rare records and everything I dreamed of.

I dream of being interviewed by Star Hits, but because they don’t exist, I had to do it myself.  So, here it is.

I meet Virginia Jones in a coffeeshop near her Silverlake abode.  The coffeeshop sells perfumes named for alternative rock hits but cost one gazillion dollars.

She sits on the patio, head to toe in black, drinking a Dirty Ginger, a soy milk latte with spicy ginger syrup in it.  She smiles slyly and says it’s her fourth. I greet her, take off my suit jacket, brush the shaggy blond hair out of my eyes, and set up to record our chat. She says she only has half an hour before she has to go do comedy in the basement of a wine shop.

Yeah, I just thought he was spectacular.  I still do. At twelve year old, I had a poster of Culture Club on my wall that I kissed every night before bed.  When I took it down, George’s lips were clear with greasy little-kid Chapstick kisses.

Which had no punk songs, but some new wave songs and some Billy Joel.  The weirdest track was My Sharona, which was written about a 15 year old girl and has some semi-explicit reference to thighs, but the chipmunks DGAF.

When I was living in Potland, I did a show on Christmas Day. It went, as I remember, horribly, but my friend Bri Pruett, who was KJing there at the time, gave me a card that permitted me to go next to sing karaoke.  That potential, the idea that I could be next, even in a bar that has closed in a town in which I do not live, makes it one of my most prized possessions. Also, that Bri gave it to me.  I’ll never cash it in. I’m perpetually next!

Yes, isn’t it weird that people give you images of yourself?  But I have some awesome fan art, including a Barbie doll of me, an embroidery of my album cover, and a pen and ink rendition of me and my many interests. They are displayed proudly in my home.

In Portland, I was given a lot of weed, which I saved in a tin and forgot in my apartment when I moved.

I like to wait at LEAST three days between washes.  If I can stretch to four, even better. My hair is long, when wash it, it’s a hot mess.  If you ever see me wearing a hat, you know it’s day four! Sorry.

You know, I’m glad you asked me that, because it’s something I have thought a lot about.  The size and shape of pens mean that they take up space on the horizontal, but also they can slip through any hole or crevice, and we live on this earth full of holes which is always rotating, so if you think of the world as a big Pachinko game, and pens as the ball bearings, pens wind up:

Yes, precisely.  Magma is made of melted pens. That’s what makes it so dangerous.

I always loved Norm MacDonald and was excited to meet him. Since I’m not a male comedian I don’t have a fun picture or memory with him, just another story about being sexually harassed. Must be cool to be a male who does comedy 😎

One of our dinosaurs died from covid

Come out to the next Paper Hero's Comedy on Saturday September 4th and see this GREAT (they're always great) lineup of some of the best comedians in LA. And all for FREE! @katrinasivad @JannKaram @heytherejeffro @badiniadones #standupcomedy #liveshow

I find it strange when people tell you, “I have no boundaries!” like it’s a GOOD thing and not a TERRIFYING thing.