The glorious Nina Storm had me do comedy on her all-woman variety show, LA Woman!

MONDAY: It picks up the silk kimonos from the cleaners.  It checks the ticket very, verrry carefully before it gets back into its Geo Metro, to make sure it has the right number of kimonos.  We do not want to punish It like last time.   It’s harder on Us than on It.

TUESDAY: It sorts tax receipts.  It puts mileage receipts in the blue envelope, it puts business purchases in the pink envelope, and it puts tattoo-and-piercing related expenses in a manila envelope.  IT DOES NOT SPEND ALL DAY FUCKING AROUND ON FACEBOOK!  Nobody wants to see a photo of what It ate for lunch, the food makes It look and smell disgusting.

WEDNESDAY:  It brings a fruit plate for Jenny’s baby shower.  It chooses a fruit plate with a lot of strawberry and pineapple and not as much melon or kiwi.

THURSDAY:  We apologize for saying that it smells disgusting.  It sometimes does not smell very bad.  We still need It to dust the house, and also to collect all loose teeth into a Mason jar.

FRIDAY: It gets paaaaid.  Yayyyy.  It can buy all the tacky blue mascara and Lee Press-on Nails it wants.  It cashes Its check right away, so that it does not appear outstanding on our bank balance.  It is on call all weekend, so It does not turn Its phone off!  Its phone is never off! 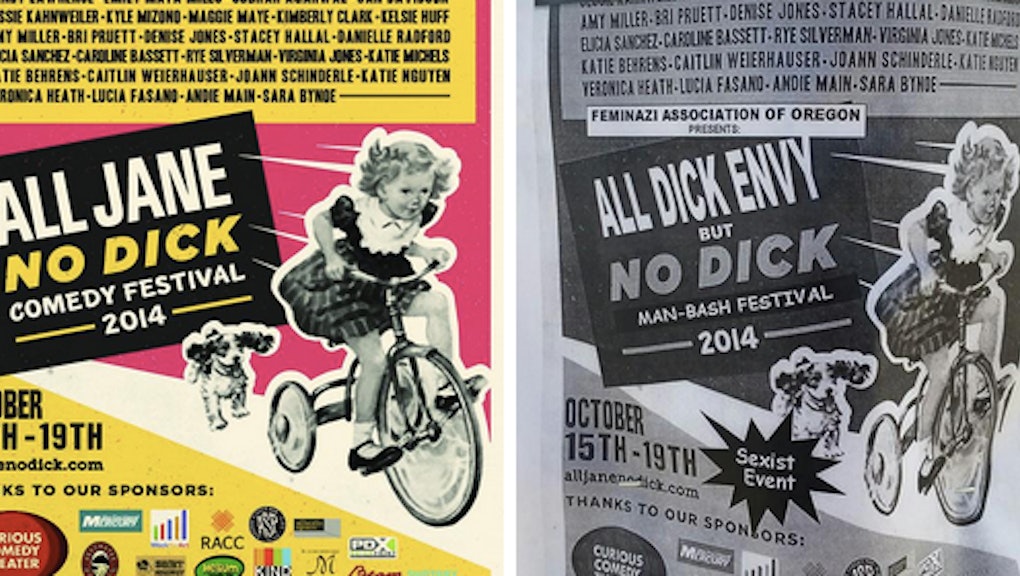 The funniest thing about the poster isn’t its existence.

The funniest thing isn’t the claim that all penises will be severed on site.

The funniest thing is that the guy who made it doesn’t know it’s funny, and doesn’t want his last name to get out in case his girlfriend gets mad.

Postscript: OK, this guy didn’t wind up protesting because he was “frightened for his safety.”  It was a little bit funny for us, looking around at sweet, cute, smart lady comics, people who wear cardigans and glasses, and feeling like we were in the middle of a gender war, but he also might have stayed home because it rained most nights.  Who knows?  Anyway, we never saw him.

All Jane got lots of great press from this threatened protest, from revered feminist institutions like Bust and Bitch, as well as the LA Weekly, Willamette Week, Portland Mercury, etc.  However, with the added visibility, we also started getting spammed by transgender individuals who were offended at the cissexist name, All Jane, No Dick (meaning: assuming there are only two genders.)  Never mind that the festival, its organizers, and its participants are trans friendly and supportive, never mind that one of the performers on a short roster is genderfluid comic Rye Silverman.  A volunteer had to spend a whole day deleting negative comments from the public spaces about All Jane, and lots of comics and organizers were shame-faced to have raised ire from the trans community for our name, even though we know it’s “edgy” and funny.  That’s what comedy is.

Postscript: This year, the festival is just called “All Jane.”

I’m back in Portland soon for the All Jane No Dick Festival, with some of the funniest women in comedy! Portlanders, come on out! My shows are listed on the right, as ever!

A beautiful birthday portrait of myself as Bloodmeadow by Pete Ellison, the very talented wunderkind at www.heyitspete.com!  And when’s the last time you watched an episode of GOTHIXXX?  Probably too long!

Here it is in a lovely frame I stole from an Oscars party.

My talented best friend Pete Ellison (designer of my website, music impresario, DJ and artist- previously mentioned here, here, and here, and here and here!)  has made this adorable t-shirt, suitable for you or your vegan/vegetabletarian friends and family!

It’s available in yellow, green, or blue, and is hand-printed in Pete’s home studio in soft, eco-friendly waterbased inks.  I like this tee especially because it doesn’t have the “and you’re a dick” subtext of a lot of veggie tees, it’s just a fun burger that loves you and wants to be eaten, because everyone knows that tofu is a very masochistic food.  Click HERE to order!

It’s honest, is what it is. A cheerful, grinning pole dancer is the only female role model America really wants. That’s why Miley Cyrus got on on a pole at 16 at the 2009 Teen Choice Awards, and why she was cheerfully twerking on Robin Thicke’s crotch at the VMA’s in 2013.  (And don’t worry, everyone acted like they were outraged in 2009, and her Dad acted embarrassed and said “I don’t know where she learned that” and the answer was, then too,  “from her choreographer that painstakingly created the routine.”)

That’s why Britney was on a pole when she was 18 and one second. We might be living through another Republican White House if Sarah Palin had just dropped the soundbites and climbed a pole. These things don’t come from nowhere and marketing doesn’t lie.  Don’t pretend you’re shocked.  Don’t pretend to be surprised when teen idols play strippers, again and again-  Performers do what is asked of them.  Feminism has fallen down gone boom and we all need to pick it the fuck up.

For one second, think about whether you, as a person with lady parts, have ever said “It’s fun to go to the strip club an’ get attention from the dancers!”, or said “Those Suicide Girls seem pretty self-actualized, because having tattoos means you’re your own person!” and realize that you might be part of the problem. Being comfortable with your own body and sexuality has gotten confused with being porn-positive and chauvinist-friendly to an uncomfortable degree.  Moby tried to bring up how misogynist the Robin Thicke video for Blurred Lines was, and everyone shouted him down like he was an asshole.  I’m not talking about suppressing freedom of expression, and I’m not saying you shouldn’t do exactly what pleases you- I’m just saying, if you don’t like the society we’re living in, own your part in creating it.

Hey! Serious for a second! That was weird, huh.

When we die, we should have our Twitter follower count engraved on our headstones because that’s our worth as people.