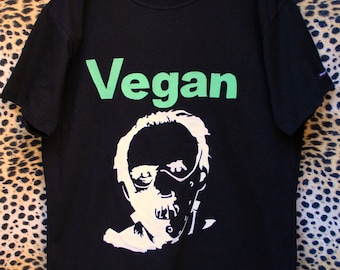 Long ago, we didn’t have Pandora or Spotify or even Pitchfork or Myspace to find new music. Not even Myspace. In my generation, if you wanted to find cool music, you had to go home with an older guy. Maybe one who had a college radio show. Go through his record collection. That’s what you did. It was a gamble. You might get a free t-shirt. On the other hand, you might find a collection of Styx records. That means you wasted a night of your youth.
There was this one time I found a Smiths record.  It was called Meat is Murder and it had a song on it called Meat is Murder.
Meat is Murder, I knew even then, is not a good song. It’s stupid and overblown and it has bad logic. The lyric is: It’s death without reason, and death without reason is murder. That’s not true. If anything, murder has MORE reason than other death. If my aunt gets hit by a bus, is that bus a murderer?

The song has cow noises that sound like those little toys you flip over. But I had not really thought about meat before, and I became a vegetarian that day, for the best reason, which is for Morrissey.

The last meat I ate on purpose was a Fishwich from McDonald’s in August 1987. If that was before you were born, please- release yourself from the responsibility of telling me that. Also, know that every time you say- I wasn’t even born then- you’ll get back. Sometimes in spades.

My sisters made fun of me. My Dad told me I was going to die from malnutrition.

I went to Thanksgiving with my best friend in college and her grandfather turned to me and yelled “You ever try meat? You might like it!”

Another friend’s mother served me spaghetti with meat sauce and said it was walnuts. When I said it was OK, I could eat salad she said “I’m sorry, I’m sorry, I just thought it was all in your mind!”

In the 80’s and 90’s, many people continued to ask questions about why I was vegetarian, but I think the most hurtful one was- how do you keep your weight on? Touche, custodian lady.

In the early 2000’s, I stopped drinking milk. It turns out, I was lactose intolerant. It was a revelation. I didn’t know you could just live a life without farting all the time. I cut out eggs, because I didn’t care about eggs.
When people ask you why you don’t eat meat these days, they ask if it’s for health or moral reasons. If it’s health, they’re ok with it. If you had to stop eating animals because your blood is mostly cheese, you’re suffering, and you’re not judging them. I think it’s like how people who don’t drink get asked if it’s by choice or court order.I’m not judging you.

I have never asked anyone to be vegetarian. If a boyfriend spontaneously becomes vegetarian, his friends will all think you did it, and after you break up you’ll see him at a party, laughing and eating a rolled up hamburger patty with his hands over the grill with his new girlfriend, who is paleo and teaches crossfit.  Eventually, my sisters went vegetarian, then they cut out milk. My mother said “I’m too old to be vegetarian.” My sister calls me to complain about my mother eating ice cream and farting up her house. She doesn’t think there’s any other way.  My mother says it’s too hard to remember what is and isn’t made of an animal.  Think of it this way.  Everything that grows from the earth, from every plant, every grain, every fruit, every vegetable, I eat. I’m not crazy about pumpkin or sweet potatoes, probably from holiday related trauma. Everything that comes out of the ground in the world, I eat. If it can be plucked or shucked or harvested, I’ll eat it. If it’s something that has to be trapped and killed, I don’t eat that. So that’s easy to remember. And I can eat any food that doesn’t have animal parts put into it. It’s really lots of foods.
It’s carnivores who are complicated. Over here, there’s animals you eat: big fish, big pigs, cows, chickens. Over here, there’s animals you love, cats, small fish, small pigs, and depending on where you grew up, dogs and horses. You can be doing really great but you screw up and eat a cat one time and people never let you forget it.
So one day, I get the call.
My sister called me to say: OK, while I was living in England, there was this green apple and sage sausage that British people eat, because most things they eat are some kind of sausage. And they had a vegetarian kind at the store, and I was craving them recently, and I found them, and it was at Whole Foods, and it was in a brown paper wrapper, and I took it home, and I cooked it, and I ate it, and I read it, and that was the wrong order, because it was made of pork!
I started laughing and I couldn’t stop.
She said, You don’t understand, I’m a vegetarian!
I said, well, not today.
I said, baby, I love you, and people make mistakes, but what do you think I am, vegetarian Pope? I can’t absolve you from pig eating. Anyway, it doesn’t matter- It’s about intention, not execution.
Don’t think I don’t have vegan superpowers. I do. You know breakfast places? Like, not brunch places necessarily, but places with several different flavors of pancakes and everything comes with bacon and potatoes. What I know that you don’t is that every single drinking glass smells like cooked-on egg from the dishwasher, and you guys can’t tell. It’s like seeing into another dimension.

Last night Trump was asked to condemn white supremacy—and refused. He has called neo-Nazis "very fine people." He has inspired disgusting acts of racism and violence. This is the most dangerous president in the modern history of our country. He must be defeated.

It’s a Tao-a-thon! Join 100 comedians from around the world in a 12 HOUR TELETHON to save @TaoComedyStudio Sun, Oct 11 @ NOON-MIDNIGHT PACIFIC!

I AM THE BAD THING THAT HAPPENS IN PHILADELPHIA

Of all the things you’ll have to worry about in your life, the 50K/month deposit limit on your bank account is not one.