Richard Thompson and his hat did his 1000 Years of Popular Music show at Portland’s Aladdin Theatre last night, moving through from the first known round (the extremely timely Sumer is Icumen in) to Britney’s pre-Federline hit, “Oops- I did it again.”

The show hit all the high points for me, because it was like going to a rock show and a music history lecture at the same time. Also, attending a show with The Human Fly’s target demographic lets a thirtysomething and her husband, who still has quite a bit of his own hair, feel like the new hotness, as opposed to attending an Editors show, which lets us know that we look and dance like Jabba the Hutt.

The Boomers went crazy at his Beatles cover, and Spouse enjoyed his Easybeats and Henry Purcell.

I ran a half marathon in San Francisco last November. I was beaten by a guy dressed as a Jack-o-Lantern, someone dressed as a cow, a speed-walker with a Polaroid of his deceased dog pinned to his sleeve, and many, many children, but I finished and did not die. Speed is not what I bring to the sport of distance running. I bring endurance and the willingness to suffer. Since I have not killed myself yet, I am currently training for the Portland Marathon. I am looking for a chick or two to train with, so write if you want to run ten minute miles with me.

When I was visiting with Fez Marie Whatley in NYC, I did mention that if you train for and complete a marathon, you are guaranteed not to have a heart attack for the following year. That is to say, no one ever has completed training and a marathon and had a heart attack in the next 12 months. The downside is that this does not include people who have heart attacks in training or during the race. Fez did not seem overly impressed by my factoid, and visibly shuddered.

I have read a book on marathoning by Hal Higdon, and I have learned many things. One of them is that large people who train for marathons are called “Clydesdales.” It is impressive that after completing a hundred marathons, Hal still has the energy to reach out and hurt my feelings.

I have an unreasonable interest in the Japanese Lolita cosplay subculture.

Whether the Japanese girls are dressed as little maids, little vampires, Victorian baby dolls, or a maid who is for some reason dead, it makes me smile. I had to stop buying the Gothic Lolita bibles after the fifteenth, because I ran out of bookshelf space. I like watching trends run through Lolita-land in Harajuku. One Summer, inexplicably, everyone had a bloody eyepatch, like the dolls had a fight.

I made a Lolita dress for myself two years ago, and I am still waiting for an event where a six-foot tall Western lolita might be appropriate.

Last year, I wanted to do Strawberry Switchblade with my extremely easy-going spouse. I don’t think there’s another hetero male in the world that would agree to dressing as half of a defunct Scottish girl-group. Here’s my initial sketch and a reference picture-

Strawberry Switchblade were an adorable Scottish pop duo who had a hit with “Since Yesterday”, and later a minor ripple with a cover of Dolly Parton’s “Jolene.”

They were best friends who later split up messily. Rose McDowall went on to work with Death in June, Coil, Current 93, Nurse with Wound and Psychic TV. I think that Jill is driving a cab in Glasgow.

Here’s how our costumes turned out:

During my research, I noticed that there were a lot of photos of Strawberry Switchblade touring Japan in the early 1980’s. I also found a pic of an early Visual Kei group, Velvet Eden, that used to dress as Strawberry Switchblade, and covered their songs. Half the group, a drag artist named Dada, is also involved with/models for Lolita clothes label Arachnophobia. Which brings us to the question: was anyone dressing like a doll who was not first into Strawberry Switchblade?

What does it all mean? Did Strawberry Switchblade invent Gothic Lolita?

Here is a brief film documenting the challenges our French bulldog had with the floor cleaning robot, Roomba.

Eventually, she killed that Roomba by jumping on it until the wiring broke.  Broken robot was replaced by a functioning robot that Hazel and her brother Chico hammered out an uneasy peace with.

Update: this is STILL my top video on Youtube.  50K people watching an old grainy recording from our first digital camera, which I bought on Overstock.com, of a now-dead dog barking at a now-dead Roomba.  Life is weird.

Spooky music? You think you like spooky music? You ain’t heard spooky music until you’ve spent an evening with a six foot blonde moaning to a discordant guitar. He’s self-pressed some 40-odd records, most of them mentioning suicide, European jewels, and/or janitors.

It was great- there was a lot of Jazz/Skronk flavored “jamming” with local hero Sam Coomes and drummer Emil Amos. Jandek asked the audience that if they wanted to leave, to please do so between songs, so there was this herding phenomena when songs ended after ten or fifteen minutes.

He was everything I thought that a middle-aged outsider musician could be, and more. Songs about love, depression, and the speed at which his friend Eddie the Wino can down a bottle of Wild Irish Rose.

He helped me solve a lot of problems I have when trying to sing and play guitar at the same time. His solution is: when he is singing, the guitar hangs limply around his neck. When he is done singing, he plays his guitar some more.

The Jandek-loving masses wandered out of the theatre in a daze two hours later. I really did feel hypnotized. He was totally un-charismatic, but in a hilarious way. No chitchat, very little acknowledgement of the audience. At the end he got a standing ovation (mostly in stunned amazement) while he packed up his own guitar and got his lyrics sheet and walked out the door.
For a weirdo ex-Texan, seeing Jandek perform was a little like seeing the tooth fairy.

I have a cool friend who is doing contract work in Japan, and because he knows I am obsessed with Gothic Lolitas, he was kind enough to send me photos of Japanese teenagers in full plumage that he took in the park. I have realized too late that I need to develop a skill set that will get me contract work in Tokyo. 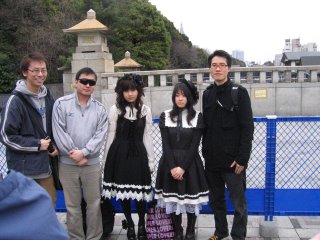 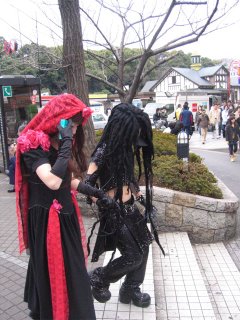 Photo #3: You have to be careful, because when the combination of dreadlocks and platforms results in nose breakage, people tend to point and laugh.

3A: Worst mashup ever – Rasta-goth. 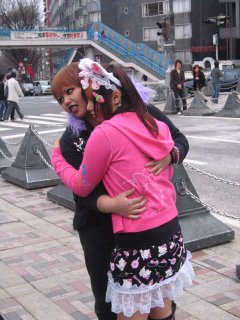 Spouse had an exciting Johnny Marr sighting last week at his place of work: He was purchasing an XTC record.

Today was even more exciting when Spouse was driving down a major street and stopped short at a door swung open on a red Mustang, and found that he had almost killed Johnny Marr, the king of jangly, layered guitar. I’m really glad he didn’t.

Post 2: I’ve decided I’m going to keep all my nerdy Marr sightings here.  In the Spring of 2009, I got a call that Johnny Marr was at Nike, visiting shoe overlord Parker Green.  I was so excited, I hid in a cubicle and took very bad pictures with my phone.  He was travelling with his kids, who also got shoes, and as he walked out (towered by his children) a woman asked “Who’s that?  Is that the Jonas’ brother’s dad?”  Yes, that’s who it is.  It’s funny working somewhere that Kobe Bryant and Lebron and Michael Jordan regularly show up, but I don’t care until Johnny Marr appears, and then nobody else pays notice.

Dec 2010- I made plans for the Helium open mike with Stacey Hallal, picked up spouse at Crossroads records for dinner, and suddenly in walks the mushroom haircut of the Marr.  I froze like a rabbit in the path of a freight train.  I had to move away from him so that I would not start blathering smart-sounding dumb things about music.  He talked to Spouse about a record he was looking for, and that he had been working on soundtracks.  Spouse said, oh, how do you find that?  and Johnny said, well, you know I did the Inception soundtrack, and that went alright.

When The Onion is more honest than news outlets.
#RoeVsWade

Get your tickets while they last
https://www.flapperscomedy.com/shows/bootlegger-thursdays/67151/

Why should your baby change my life when your dick didn’t?